The Great Revolt: Inside the Populist Coalition Reshaping American Politics (2018) 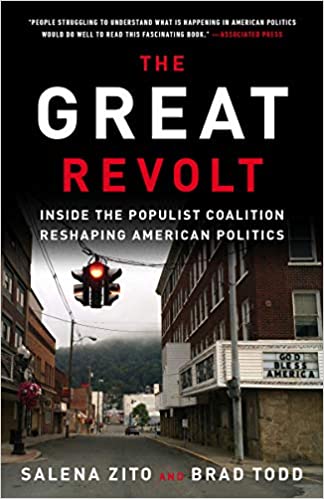 A CNN political analyst and a Republican strategist reframe the discussion of the “Trump voter” to answer the question, What’s next?

NAMED ONE OF THE BEST BOOKS OF THE YEAR BY FOREIGN AFFAIRS • “Unlike most retellings of the 2016 election, The Great Revolt provides a cohesive, non-wild-eyed argument about where the Republican Party could be headed.”—The Atlantic

Political experts were wrong about the 2016 election and they continue to blow it, predicting the coming demise of the president without pausing to consider the durability of the winds that swept him into office.

Salena Zito and Brad Todd have traveled over 27,000 miles of country roads to interview more than three hundred Trump voters in ten swing counties. What emerges is a portrait of a group of citizens who span job descriptions, income brackets, education levels, and party allegiances, united by their desire to be part of a movement larger than themselves. They want to put pragmatism before ideology and localism before globalism, and demand the respect they deserve from Washington.

The 2016 election signaled a realignment in American politics that will outlast any one president. Zito and Todd reframe the discussion of the “Trump voter” to answer the question, What’s next?