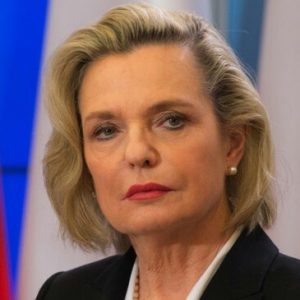 Anna Maria Anders is a Polish Senator and a Minister in the Polish government. She is the Secretary of State in the government of Poland’s Prime Minister, Mateusz Morawiecki, where she is Plenipotentiary for International Dialogue. In March 2016, she was elected to Poland’s Senate, representing Poland’s eastern flank. She also represents Poland in the Women in Parliaments Global Forum, a global network of female parliamentarians that supports greater participation of women in politics. Minister Anders is the daughter of General Wladyslaw Anders, the legendary World War II Commander of the Polish Forces at the Battle of Monte Cassino, and well-known singer and actress Irena Renata Anders. She was born in London, England. In 1986, Anna Maria Anders married United States Army Colonel Robert Alexander Costa. Their son is an officer in the US Army.