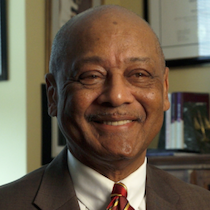 Robert L. Woodson, Sr. founded the Woodson Center in 1981 to help residents of low-income neighborhoods address the problems of their communities. A former civil rights activist, he has headed the National Urban League Department of Criminal Justice, and has been a resident fellow at the American Enterprise Foundation for Public Policy Research. He is an early MacArthur “genius” awardee and the recipient of the 2008 Bradley Prize, the Presidential Citizens Award, and a 2008 Social Entrepreneurship Award from the Manhattan Institute.

Robert Woodson will be speaking on the topic:
“Conservative Values in Rebuilding Family and Community”