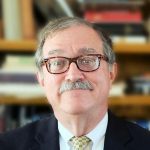 Wilfred M. McClay is the G. T. and Libby Blankenship Chair in the History of Liberty at the University of Oklahoma, and the Director of the Center for the History of Liberty. His book The Masterless: Self and Society in Modern America (The University of North Carolina Press, 1994) was awarded the Merle Curti Award of the Organization of American Historians for the best book in American intellectual history. He is a member of the U.S. Commission on the Semi-quincentennial, which has been charged with planning the celebration of the nation’s 250th birthday in 2026. His most recent book was Land of Hope: An Invitation to the Great American Story (Encounter Books, 2019)