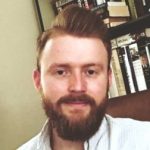 Timon Cline is a fellow at the Craig Center at Westminster Theological Seminary and an attorney practicing in New Jersey. His writing has appeared in the American Spectator, Mere Orthodoxy, American Greatness, Areo Magazine, and the American Mind, among others.

Timon Cline spoke on the topic: “Church and State in Colonial America”

An edited version of this talk was published in The American Conservative:
https://www.theamericanconservative.com/a-puritan-politics-life-unity-and-the-pursuit-of-god/