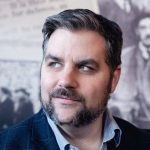 Michael Brendan Dougherty is a senior writer at National Review and a nonresident fellow in the Social, Cultural, and Constitutional Studies division of the American Enterprise Institute, where he studies the republican tradition in American political thought. His essays have been featured in numerous publications including The American Conservative, The Atlantic, The New York Times Magazine, and Politico. He is the author of My Father Left Me Ireland: An American Son’s Search for Home (Sentinel, 2019).