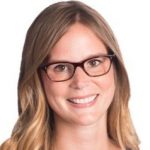 Kelsey Bolar is a senior policy analyst at Independent Women’s Forum. She is also an editor of BRIGHT, a morning newsletter for women, by women, a senior fellow at The Steamboat Institute, and a contributor to The Daily Signal and The Federalist. Her work has been featured in USA Today, National Review, The Washington Examiner and more.

Bolar is a frequent guest on Fox News, Fox Business, and was featured as a speaker on the 2018 CPAC panel, “#UsToo: Left Out by the Left.”

Previously, Bolar worked for The Heritage Foundation as a senior writer and producer. There, she co-hosted the weekly podcast, “Problematic Women,” produced videos that received millions of views, and regularly appeared on radio and TV.

Bolar graduated from Lafayette College in Easton, Pa., and lives in northern Virginia with her husband, two children, and Australian Shepherd, Utah.