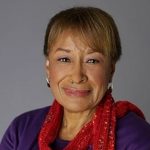 Judge Janice Rogers Brown was confirmed to the United States Court of Appeals for the District of Columbia Circuit on June 8, 2005. From 1996 to 2005, Brown was an Associate Judge of the California Supreme Court. Previously, she served as an Associate Justice of the Third District Court of Appeal in Sacramento and as the Legal Affairs Secretary to Governor Pete Wilson.

Judge Janice Rogers Brown spoke on the topic: “The Arc of the Covenant”