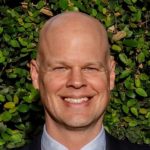 Glenn Moots is Professor of Political Science and Philosophy at Northwood University in Michigan. He is author of Politics Reformed: The Anglo-American Legacy of Covenant Theology (Missouri) and co-editor of Justifying Revolution: Law, Virtue, and Violence in the American War of Independence (Oklahoma).

Glenn Moots spoke on the topic: “How I learned to Stop Worrying and Love Christian Nationalism”