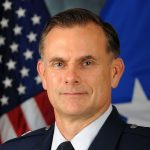 General Robert S. Spalding III is a retired United States Air Force brigadier general and a senior fellow at Hudson Institute. Spalding has served in senior positions of strategy and diplomacy within the Defense and State Departments, as Senior Director for Strategy to the President, he was the chief architect of the framework for national competition in the Trump administration’s National Security Strategy (NSS). He has earned recognition for his knowledge of Chinese economic competition, cyber warfare, and political influence. His work has been published in The Washington Post, The Washington Times, Foreign Affairs, The American Interest, War on the Rocks, FedTech Magazine, Defense One, The Diplomat, and other edited volumes.

General Robert Spalding spoke on the topic: “Data, AI, and the New Age of War”