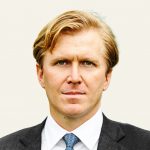 Elbridge Colby is co-founder and principal of The Marathon Initiative, a policy initiative focused on developing strategies to prepare the United States for an era of sustained great power competition. He was the Director of the Defense Program at the Center for a New American Security and served as the Deputy Assistant Secretary of Defense for Strategy and Force Development. His work has appeared in outlets such as the Wall Street Journal, Foreign Affairs, The Washington Post, The New York Times, Foreign Policy, and The National Interest. He is the author of The Strategy of Denial: American Defense in an Age of Great Power Conflict (Yale University Press, 2021), which the Wall Street Journal selected as one of the top ten books of 2021.

Elbridge Colby spoke on the topic: “Why Defending Taiwan is in America’s National Interest”