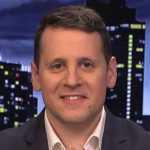 Benjamin Weingarten is Deputy Editor of RealClearInvestigations, and a Senior Contributor to The Federalist, columnist at Newsweek, and co-host of the Edmund Burke Foundation’s NatCon Squad podcast. He is a fellow of the Claremont Institute, and 2019 recipient of The Fund for American Studies’ Robert Novak Journalism Fellowship, under the auspices of which he is working on a book on U.S.-China policy. Ben’s first book was American Ingrate: Ilhan Omar and the Progressive-Islamist Takeover of the Democratic Party (Bombardier Books, 2020).

Benjamin Weingarten spoke on the topic: “China’s Capture of US Elites and What to do About It”

An edited version of this talk was published in the American Mind:
https://americanmind.org/features/florida-versus-davos/america-with-american-characteristics/