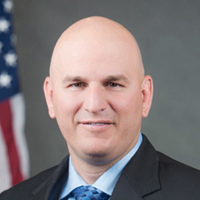 Brandon Judd has served as a Border Patrol agent for the last 22 years and as President of the National Border Patrol Council since March 2013. His dual roles include protecting America’s borders while ensuring that the best interests of all rank-and-file Border Patrol agents across the country are met. He has been called upon to testify before the U.S. Congress as an expert witness on border security on numerous occasions, and is often consulted privately by policy makers on Capitol Hill. At the invitation of President Trump, Mr. Judd has participated with the President in multiple roundtables and press conferences both pre- and post-election to discuss measures to effectively secure the border. Mr. Judd has written numerous border security op-eds that have been published by multiple media outlets including, but not limited to, the USA Today, The Hill, RealClear Politics, The Washington Times, and Fox News National.
Brandon Judd spoke on the topic: “Causes of the Border Crisis and Steps to Solving It”